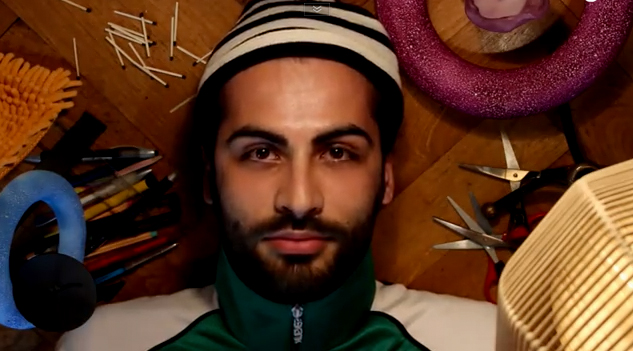 – Could you tell us more about Weed & Candy? On your Facebook Page it’s categorized as a « Professional sports team »: are you some kind of graphic design marathon runner? Artistic direction athlete? Video making sportsman?
It’s all about labels, people putting on things and myself putting on my stuff. I’ve been studying communications design and was trying hard to fit in. Don’t get me wrong, I love to design but I always used to illustrate much more. Unfortunately I never took it as something I could make money of, because I had the impression for illustration to be silly stuff. So Weed and Candy started out as my personal label I wanted to bring out silly stuff with. At first it was just meant to be a blog, where I could put all my work which did not match the criteria of serious industry type work and for quite a long time I was just going along with my blog idea, until one day when I met an old friend of mine in the ICE train to Berlin – Flo Mega. I knew Flo from back in the 90s from Bremen, where I used to live close by. He is a very very talented musician and told me that he had recently signed a contract with Four Music (SonyBMG) and was about to release an album soon. As I always loved Flo’s music, I told him that I’d love to do something for him not for the money, but for the fun of it. He looked at me and said, yes I might have something for you to do and there is a little budget too – we’re dropping a song (DDR) and still need a video. Funny thing was that despite of some simple animations I used to do for the Hannover subway info-TV monitors I had never been doing anything with moving images so far. But as I love challenges and I have a very helpful talent (I instantly learn things just from trying a few times) I was all up for it. I think this was actually the point where the REAL Weed and Candy was born. DDR later on turned out to be a big big song and brought in a lot of contacts and jobs. So to answer your question: I’ve been running and running long distance, trying not to lose my breath while trying to fit in until I realized that I can do whatever I like, love and have fun with, because mostly this turns out the best and has the highest value. So yes you could say I am a long distance runner, but as for my page categorization this is just a simple placement trick. Sportsteams show up first place in peoples profiles. Cheers! 🙂

– As an artist, how would you define your style?
Very hard to answer. This is a question I am occasionally crying myself into sleep with. Haha. Seriously. Since I have fun doing so many different things and techniques its hard for me to define a style from a classic point of view. I realized that while looking for representation in the UK. Most artists have one style. That’s it. They rock the soul out of it, but it stays the same. I admire people who can do that actually. But it seems like, I am building up a style, which I cannot see from aside so far. It will probably clear up for me in some 20 years, I can tell you then. For now I can tell you what makes me happy and thus defines my style: I love paper, I collect old paper, old books, old sketchbooks etc. I fall for patterns. Structure in in any material makes me go crazy, I love it when things look dirty, scratched, unfinished or somehow real and human, with all the little errors in them. Also I love to take things out of their context and put them together in a new connection.

– As a designer, Younes (the founder of Nessradio) is very influenced with his maroccan origins and the city he lives in, Marrakech. Do you feel inspired by your origins? And by Berlin, the city you live in – which is known for its creative energy?
Since I have a really messy history it’s kinda hard to say what my origins are. I am born in Bulgaria, but have turkish origins. 1989 we fled to Sweden, lived there a bit, then were sent back to Bulgaria but remained (illegally) in the GDR and from there moved to West Germany. Then sent back to Bulgaria again, and then moved back to Germany again. Ever since I have been living in so many cities, that I hardly can count all my apartments. Haha. So I’d rather say I am very influenced and inspired by the fact that I did NOT have clear origins and a heritage I could look up to. I had to build my own reality with my own rules, interact with people of all cultures and heritage. I was faced with problems for which I did not have the cliché solutions, I always had to go through trial and error because there was nothing that had already proven to work. This made me different from others (and very stressed out :). So I really think that the absence of origin, homeland or national identity rather led me to a creative and inspired thinking then relying on learned things.

– What kind of projects do you like to work for?
I am seriously thinking about writing down a manifesto on what my company will do in the future. One part could sound a little bit like this: I love to work _with_ people and not _for_ them. I love projects, where you have a person or a company on the other side who are eager to explore and to experiment WITH you. People who approach you on a common level basis and they want you because they believe in the outcome. As my experience tells me, the BEST things happen like this. But it takes a lot of courage to go down that way, because it has risks in it. It also takes a lot of trust. Trust in me and my team as the creative power and trust in what you do yourself, trust in your product. Unfortunately many clients (I don’t really like to call it that way but I am missing a better word) expect a traditional approach. They pay you, so you have to do it and they can tell you how to do it, when etc. They expect to have the last word on every debate. I hear sentences like: « I do not care how you get there, just do it, and do it good! (thinking part: I am paying you, so you better do it right) ». And this is the problem. People do not just ruin the vibe of a relationship, but they destroy the possibility to grow with their project. Weed and Candy is more than just a service company. So I like to work on projects with people who want something special, something that will baffle the people first and make them smile afterwards. For the medium or technique I dont really have any preference, because it is all fun to me. But yeah I guess my secret aim for 2012 is to finally go editorial and drop some illustrations for magazines.

– How did you happen to work on Neve Naive’s video « Dancer »?
Miss Flint (one part of Neve Naive) had been given my contact by another client, who told her about my good work 🙂 Neve Naive had recently signed with the label Sonar Kollektiv from Berlin and wanted to have a video finished for their first official label gig as a promotional tool to draw some attention before the album is coming. It was clear to me, that we needed to do something out of the line. Something that you don’t see everyday. Since we had a very slim Budget we decided to go all in and spend most of the money on the video rather then our pockets (don’t try this at home).

– How did you came with this idea of a fluorescent / 80’s aesthetic?
I was always fascinated by those shiny colors, but this wasn’t actually the reason why the video turned out this way. When Miss Flint played a selection of tunes with single-abilty to me, I instantly wanted to do « Dancer ». I had been experimenting with fluorescent colors for another project and felt the vibe of the song could go well with those. The song had something futuristic but from the perspective of the 80s. I loved the idea of having a retro future video. Like watching movies from the 60’s visualizing a life in space. You see what the props are made of, you can look through the props and see the very human and naive idea of what life will be in the future. I wanted to play with simple geometrical forms, tell a simple story in a simple setting which carried a wonderful colorful idea. I tried to visualize the interaction between the musical machine and the producer. Two dancers in a tight tango from the perspective of 80s designers trying to be 2001. 🙂

– What are you working on at the moment?
Right now I am working on a Music Video for Raggabund (a german Reggae duo by the names of Paco Mendoza and Caramelo) which is turning out really great and is absolutely out of reggae context, which is very important for me. It will be a Music Video for a song off of their soon to be released Album « Mehr Sound ». I am also doing all kinds of Illustration artwork for different small and big companies, doing artwork for my office mates from Urban Tree Music (a young Berlin based music label, check them out) and I have a meeting soon with Neve Naive to discuss some new stuff (get prepared. Besides that I am happy about the fact that I will be part of AW Agency’s (anjawiroth.com) Artist roster soon. A great representative agency which approached me a few months ago. I am preparing my portfolio to go online soon. Oh and by the way, I just printed a nice Postcard Set, containing 3 postcards featuring 3 motives from the Reggaeworld. I have taken iconic old Photographs and have removes essential parts and replaced them with candy. Check my site www.weedandcandy.com for more info.